How to Prepare For and PASS Sharing and Visibility Designer Exam

In this post I would like to continue our journey with the Technical Architect (TA) Exam path. I’ve already covered the Data Architecture and Management Designer Exam in the previous post. To start with, I would like to concentrate on one, in my opinion, of the most challenging modules in the TA path. Ladies and gentlemen, let’s explore the Sharing and Visibility Designer Exam. 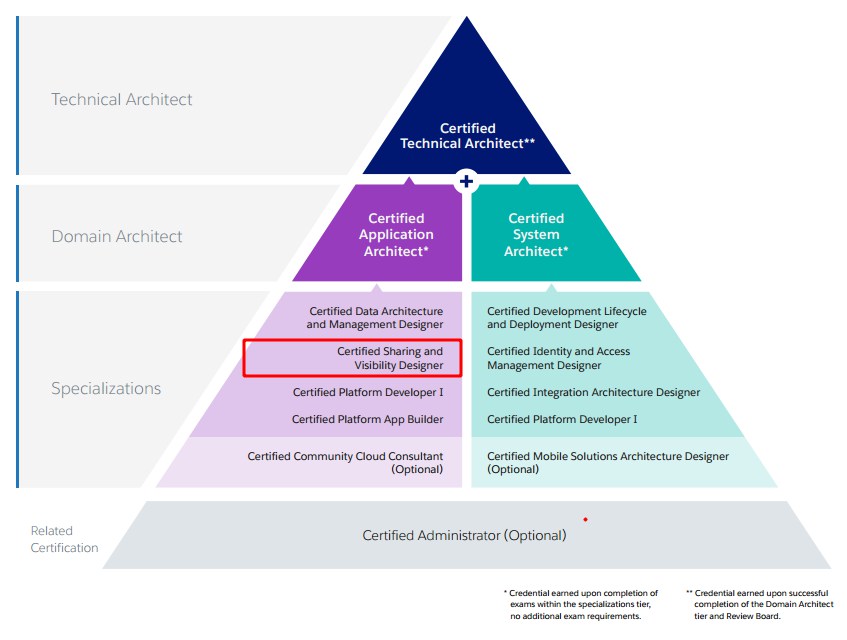 According to official exam guide:

A Salesforce Certified Sharing and Visibility Designer credential is created for architects, analysts, and administrators who want to demonstrate their knowledge, skills, and abilities to design secure, scalable security models on the Force.com platform. A Salesforce Certified Sharing and Visibility Designer should be able to communicate technical solutions to technical stakeholders and provide a project delivery framework that ensures quality and meets business requirements.

Exam spans really huge number of functionalities and aspects of Salesforce platform. Coming up with suitable sharing model is an essential step in designing sound solution that will provide secure application data access. During design phase it is important not only to assess current data access requirements but to also anticipate future ones. In this blog post I will try to cover all main certification areas and nitty-gritty of Salesforce sharing model.

Before we dive into different sharing use cases and scenarios , it is worth realizing that different Salesforce licenses determine the baseline of features that the user can access. When designing the sharing model you have to know that some of the licenses do not utilize the sharing model at all (!) – like High Volume Customer Portal (HVPU) license. Familiarize yourself with the differences:

Full Sharing Model Usage Users/Licenses
Most Standard Salesforce license types take full advantage of the sharing model components. The license might not make a module accessible, or even some objects accessible. For example, the Force.com Free edition can’t access any CRM objects. However, the sharing entities, and functionality, still exists and is ready when and if the module ever does become active.

During my preparation for the exam I found a really nice diagram from Steven Herod that shows the relationships between the various license types: 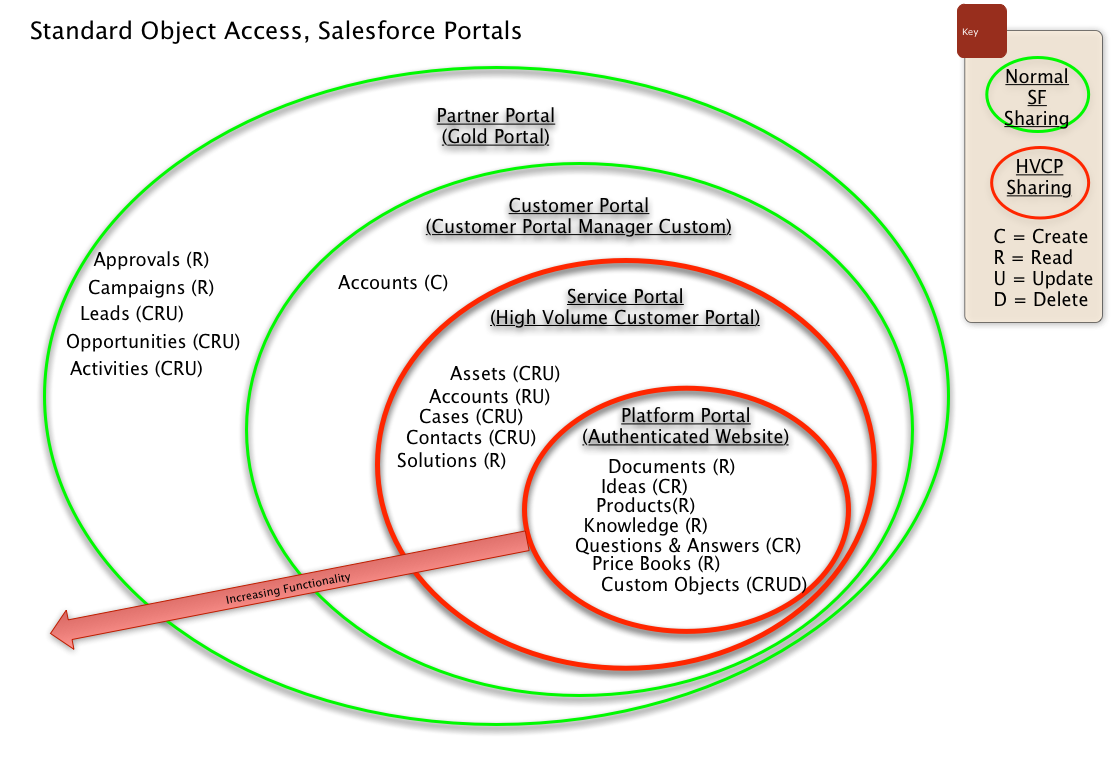 To close the topic of HVPU license users I would like to mention Sharing Sets that are a way to make some of the records accessible to the users with that license. To play a little bit with that functionality you have to have the Community enabled in your org and then you can simply go to Customize -> Communities -> Communities Settings. You can then select which object type records you would like to share: 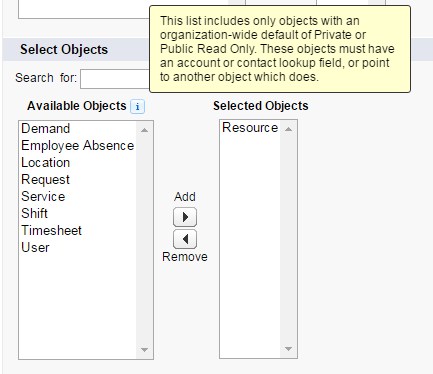 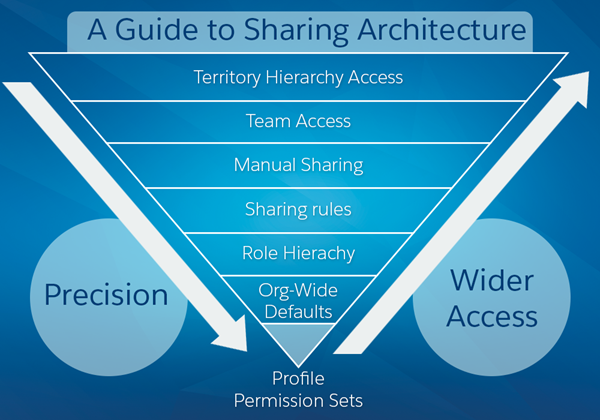 You have to be able to describe the features and capabilities available to restrict and extend the object, record, and field access.

There are couple of questions regarding differences between profiles and permission sets, for example where can you specify login hours to the system (profiles only).

Every record must be owned by a single user or a queue. Concerning ownership there are a couple of questions that refer to the situation where single user possesses more than 10k records.

If a single user owns more than 10,000 records, as the best practice: 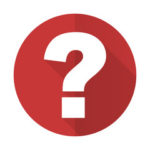 Universal Containers has successfully implemented a large Service Cloud rollout for their national call center 3 months ago. One of their largest customer accounts, United Automotive, has over 15,000 open cases. Agents are now having trouble opening new cases for United Automotive. When they try to create a case, the following Error message appears for them:

They notice that this only occurs for the United Automotive account. If they try to save the case again it will usually work, but the problem seems to be happening more and more often.

Which option should the Architect recommend?

A. Review all Account sharing rules to ensure that the Customer Service team has Read/Write access to the United Automotive Account.
B. Review the Account structure to split the United Automotive account into multiple branch accounts.
C. Review all Case Sharing Rules and consolidate where appropriate to reduce the total number of sharing rules.
D. Review the Customer Service Profile to ensure that they have Read/Write access to the appropriate Case and Account Fields.

To better grasp the concept of setting org-wide defaults I strongly recommend going through Trailhead module. 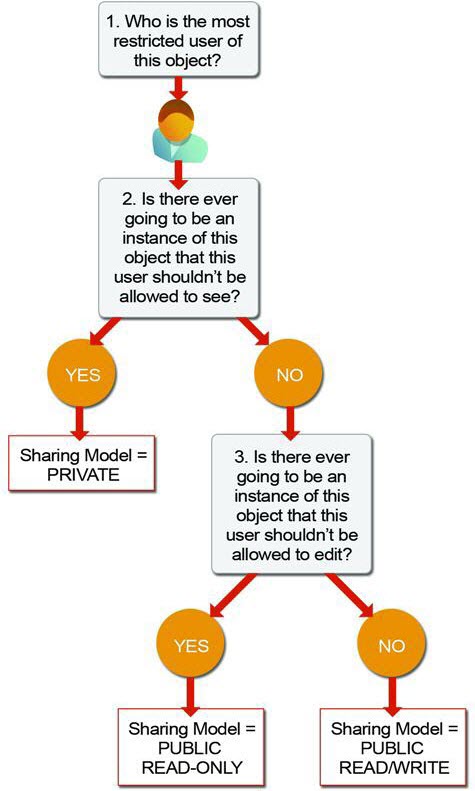 Once you find out answers to these questions you will know which sharing model suits your situation best:

There are two kinds of rules possible to define in Salesforce:

Example that is constantly repeated in different scenarios and questions – “a person in Service needs to be able to see some Sales data, but they live in different branches of the hierarchy” 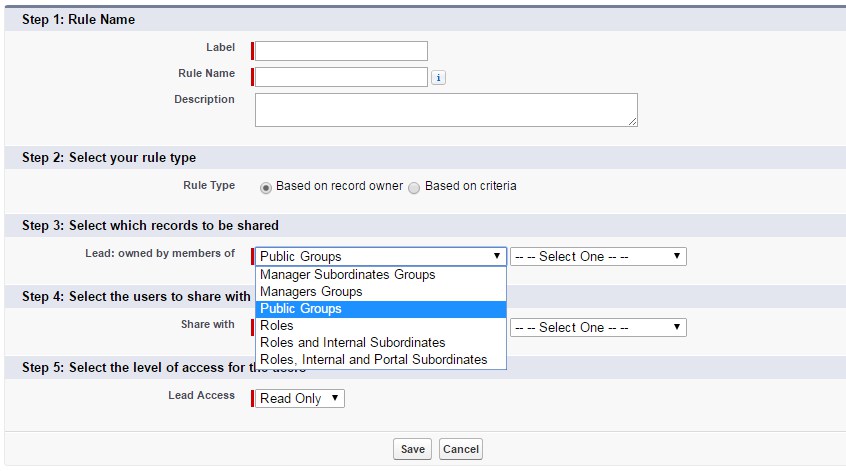 Here I have to stop for a while and bring a Public Group concept. A public group is an administrator-defined grouping of users that can be used to simplify the creation of sharing rules. Each public group can be a combination of:

There are 3 types of teams in Salesforce:

The record owner adds team members and specifies the access level each team member has to the record. Some team members can have read-only access, while others have read/write.

Account Team fields. There would be also ‘Contact Access‘ field but as the organization-wide default for contacts is set to Controlled by Parent, it is not visible

Things that are worth learning:

Let’s stick to such an example – Maria owns ACME account and shares it with Frank. Now Account Sharing Table has two records. One, obviously, is Maria, who is an owner and has full access to the ACME record. Frank was granted Read/Write access level to the mentioned account.

Now it’s easier to understand Manual Sharing (sometimes also called Apex Managed Sharing). If you want to create some logic that will share certain records in APEX code, you just have to create special records that will open access to the desired records. The aim is to create records of certain type, for example , all share objects for custom objects are named as MyCustomObject__Share, where MyCustomObject__c is the name of the related custom object.

When granting access you have to provide following information: 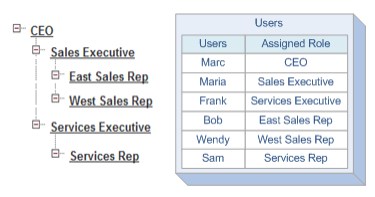 Under the hood Salesforce generates such set of records: 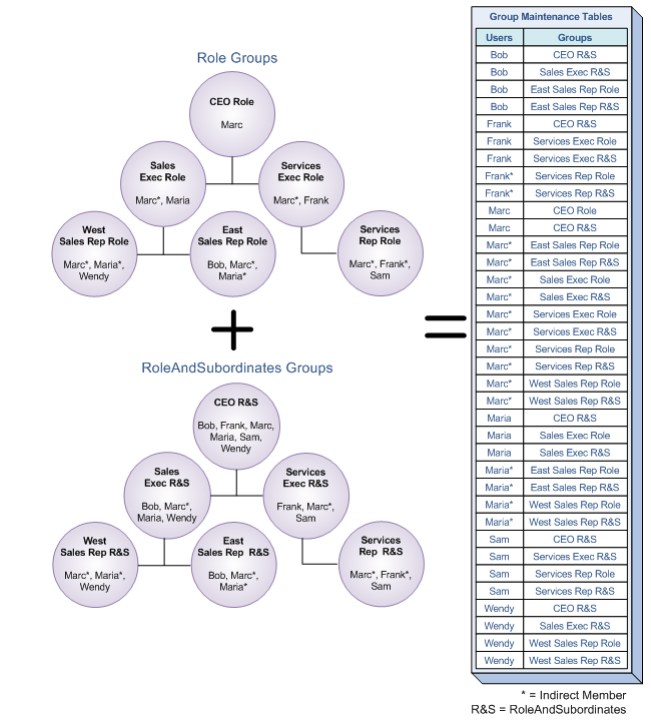 See? Marc is a company’s CEO. Therefore he is an implicit member of every role in the system. He holds CEO Role but also Sales Exec Role, East Sales Rep, West Sales Rep, Services Exec and also Services Rep. Why is it built in that way? Every time you open the record the Salesforce has to determine if you have the access to it. It is much easier and faster to get that information from a special table than calculate everything in real-time. Bear in mind that in some large organizations with hundreds of hierarchy nodes, thousands of sharing rules, millions of data rows, and portals for customers and business partners processing such the amount of data would be impossible in reasonable time. That’s why, Salesforce calculates record access data only when configuration changes occur.

There are plenty of questions regarding reports and reports’ folders accessibility.

In the end it is worth mentioning also some additional concepts that are refered in the exam.

SCAN THIS QR CODE WITH YOUR PHONE 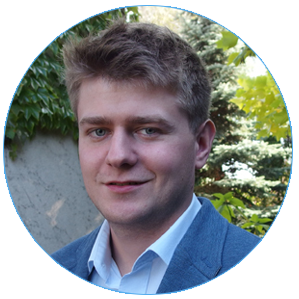